Marketing cookies are used to follow visitors on websites. The intent is to show ads that are relevant and engaging to the individual user and therefore more valuable to publishers and third party advertisers.

Statistics cookies help us understand how visitors interact with this website by anonymously collecting and reporting information.

Cookies are small text files that are used by websites to shape the user experience. There are cookies that are increasing in number because they belong to basic website functions that are. You must consent to the activation of permanent cookies. You can obtain your consent at any time in our data protection information at https://www.ledlinearusa.com/data-privacy/ "Use of cookies".

All you need to know about LED tapes and the LED Linear™ difference!

What influence does the production method have on the quality of the light source?

As the name suggests, this method involves overlapping individual LED sheets and repeatedly soldering them together in order to achieve longer lengths of LED tape.
These soldering points do not have proper contact with the heat sink. The heat from the LEDs cannot be dissipated effectively and the product degrades faster. These substrates are also less flexible, with each connection representing a weak point at which the LED tape may break causing an interruption to the electrical current.

This method starts with the substrate reel. In this fully automated process, the substrate is printed, equipped with LEDs and the electronic components with a precise pick and place process, controlled and cut into individual full tape lengths. In the end, the finished LED tape is wound onto a new reel that is ready to be shipped or assembled into a finished luminaire.

For a more reliable light source!

Thermal management has a huge impact on various aspects of the LED light source. A common misconception is that an LED light does not get warm, however, when placed on a considerably smaller substrate, thermal management becomes a critical concern for luminaire design. With adequate heat dissipation, the aging and degradation of an LED can be significantly slowed down. This means that intensity, homogeneity and color properties of the LED chips remain stable, thus ensuring a longer lifetime and better durability of the luminaire. This technology enables high power in small profile luminaires.

Some materials dissipate heat away from the LED chip better than others. Many manufacturers use versions of PCB plastics as substrates for their LED modules. Plastics, among others, have poor thermal conductivity, which means that heat accumulates causing the LEDs to heat up more quickly.

LED Linear uses a proprietary substrate that draws the heat away from the source and transfers it to high quality aluminum profiles. The heat does not stagnate in the luminaire, but is transferred and dissipated through the heat sink into the air and/or the materials the luminaire is mounted on. The LEDs degrade much more slowly than competitive fixtures and their quality is maintained for a longer period of time. 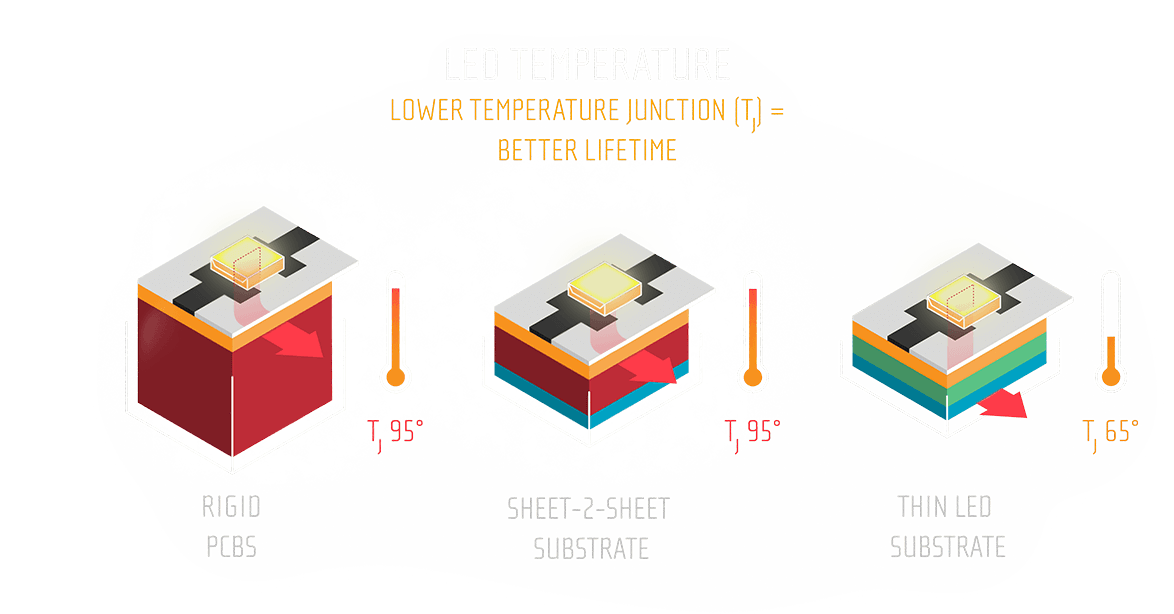 What influence do binning and color shift have on the light source?

LEDs have different colors due to production tolerances. It is important to sort them into so-called “bins” to make sure. This binning structure follows the MacAdam ellipse metrics which guarantees no visible differences if within 3 step MacAdam (SDCM3). The lower the number, the tighter the binning, and thus the higher the value of an LED chip. To obtain a color impression that is as homogeneous as possible, only LEDs of the same binning should be used.

What is binning tolerance?

What influence does the electronic design of the LED tape have on the constant brightness and thus on the quality of the light?

Fewer electronic parts are installed on low-quality LED strips in order to save costs. For example, these tapes use only one resistor per step length – a group of LEDs on the strip. Part of the incoming current flows back through the resistor causing less current to be transported to the other LEDs. The LEDs behind the resistor, therefore receive less current and thus have a lower lumen output. Extrapolated to a long length of an LED tape, this power drop becomes visible to the eye. With a length of 7 meters (23 ft), there can be a loss of brightness of more than 25%. 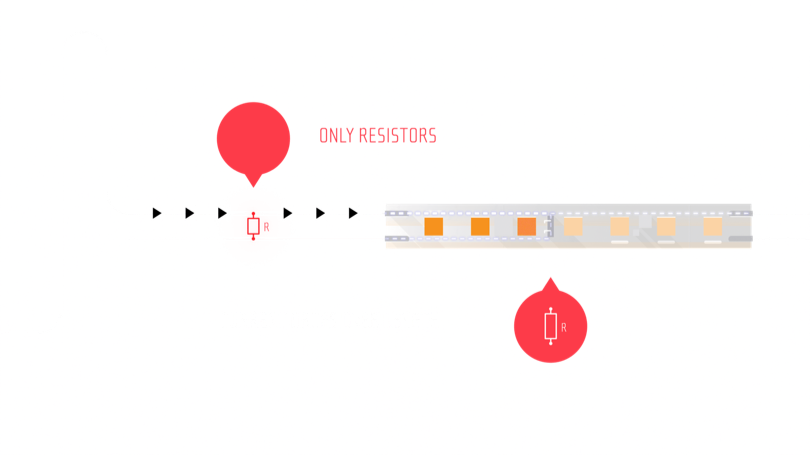 On an LED strip of higher quality, more electronic parts are installed per section. For example, a separate current regulation (IC Driver) per step can be integrated, which sets the current evenly for each step and each LED. This prevents a drop in power allowing the LED tape to maintain the same intensity over its entire length. 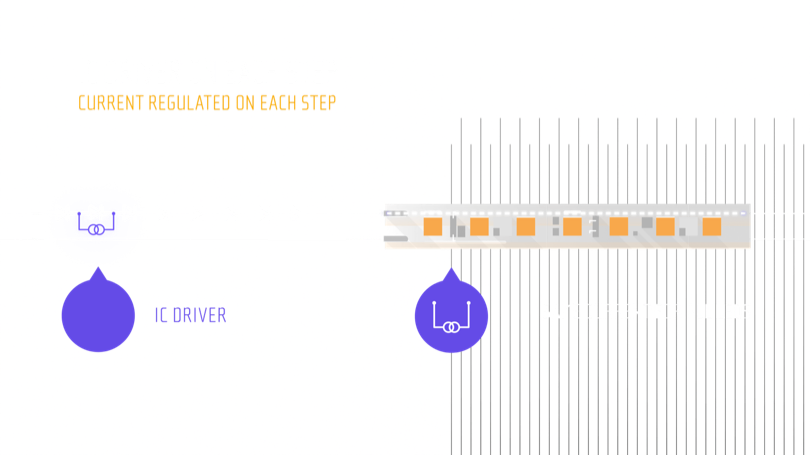 The lifetime of an LED tape is usually specified in such a way that a certain percentage of luminous flux is present after a certain number of hours. E.g. 60,000 h L90 means that after 60,000 hours 90% of the original lumen output is still present.
This is measured according to the IES LM80 method. This method outlines the procedures of actual light output testing of LED chips e.g. for 10,000 hours. These measurements are then extrapolated in the IES-TM21 calculation by max. 6 times related to the real measured time. This way you get the lifetime after 60,000h.
This information is particularly interesting for projects if a certain amount of light has to be present after a defined time - for example in an office application. The difference between 60,000 h L90 and 50,000 h L80 does not sound like much at first. However, if you compare their light output at the same point in time, e.g. at 60,000 hours. The difference can become obvious as seen in the comparison chart below. 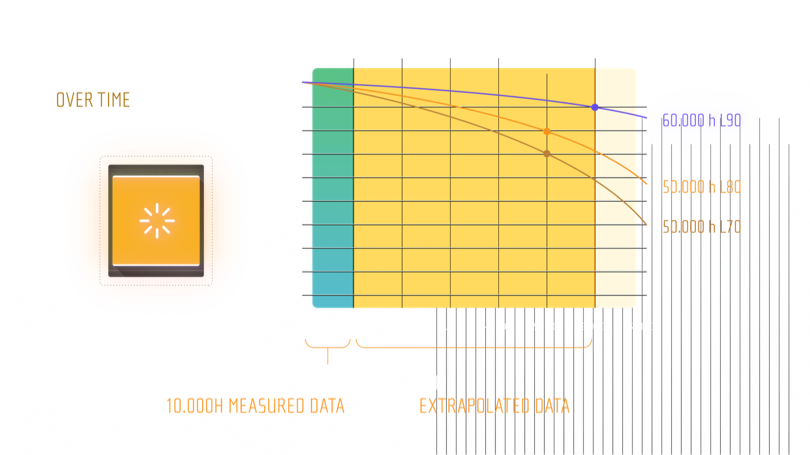 All LED Linear™ products ensure a homogeneous light which is important for cove or indirect lighting utilizing low profile luminaries such as XOOLINE.

How can the photometric code give an indication on the quality of the light source?

The following two numbers indicate the color temperature. In this example, 27 stands for 2700 Kelvin.

The extended photometric code starts from here on. The first number indicates the initial binning e.g. 3 for SDCM3.

The second number indicates binning after 6,000 h. If this value is identical to the value of the initial binning, it can be assumed that the binning will continue in the further course the quality is guaranteed. If for example, there is a 5 (SDCM5) instead of 3 (SDCM3), the color homogeneity of the LEDs will decrease over time.

The lifetime of the LED can be read from the last digit. The "9" is in this example of the abbreviation for L90.

How can you measure how well a light source reflects the colors of an object? 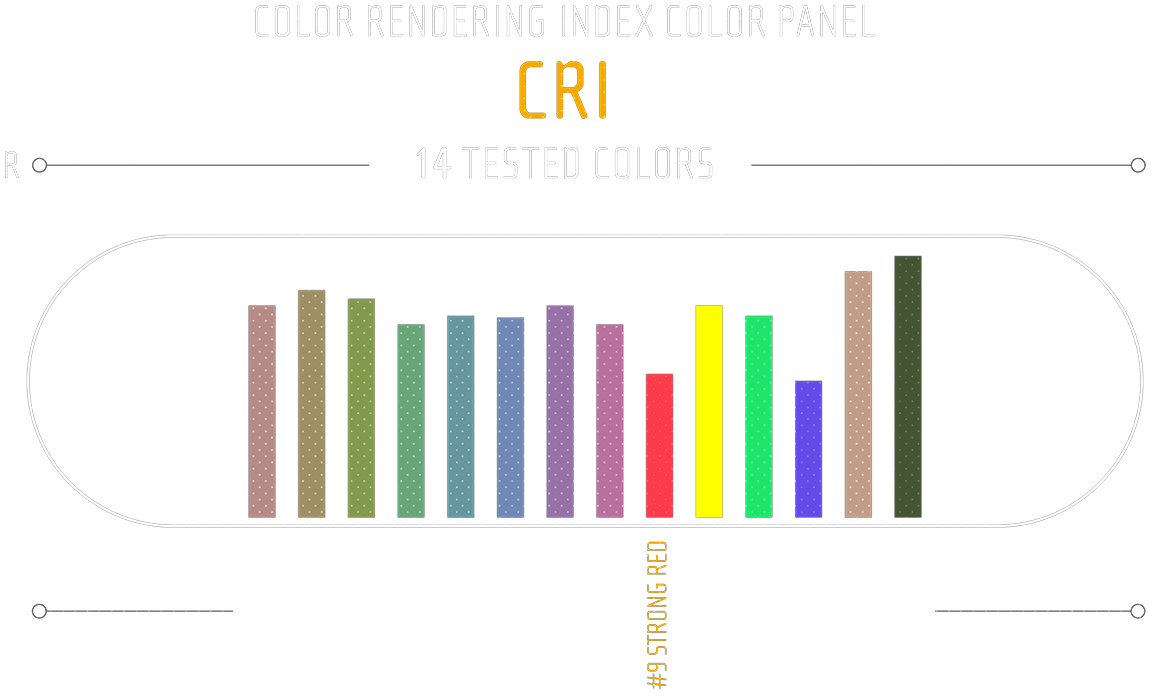 The TM30-15 report is a novel method to measure color rendering. It also takes the sun as a reference value of 100. 99 colors are tested with this method instead of 14, thus an expanded spectrum can be analyzed. The average of all 99 colors results in the Fidelity Index Rf. In this example, the difference can be seen particularly well in the red/orange and pink skin tones. Another component of the TM30-15 method is the gamut index Rg which measures the saturation of colors within the same color spectrum. The ideal value for Rg is 100, but the measured value can be both below and above 100. A perfect light source would have a value of 100 for Rg and Rf.
Good or high color rendering is recommended in areas where products are illuminated. Best examples are museums, art galleries, as well as retail stores. 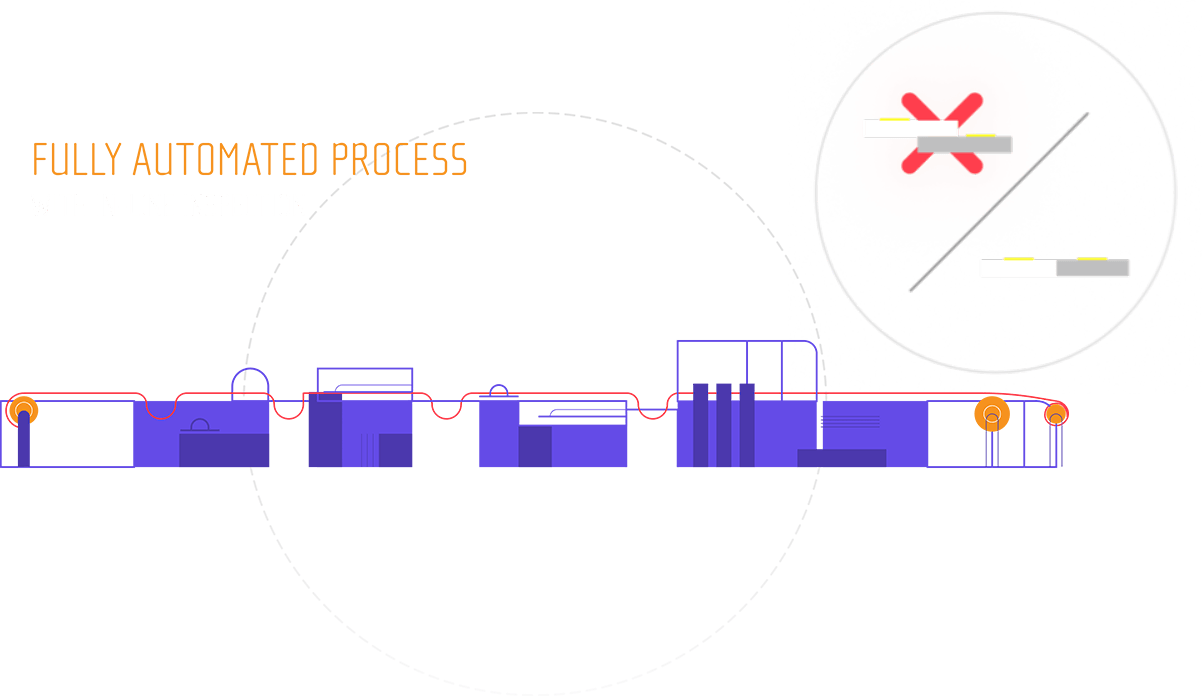 The advantage of this method is the continuous substrate. There are no weak points on the LED tape leading to dramatically reduced chances of failure. There are automated checkpoints within the line throughout the entire production process. This way, any irregularities can be quickly identified and corrected.

This highly automated process enables the assembly of more than 45,000 components per hour through seven simultaneous activities and meets the highest demands on the quality of the LED Linear LED Flex Tape series. This mode of production not only enables highly efficient and fast production, but it also guarantees the highest quality and clear batch tracing through the printing of the production code on each reel of tape.