The beginning has been made and everything is finished in time for the start of the new school year: seven classrooms of the Theodor Fliedner High School in Dusseldorf are already equipped with the new LED luminaires of LED Linear™.

With the linear luminaire XOOMINAIRE™ seven classrooms are shining in a new light. The three light lines in the ceiling provide a bright and even illumination of the horizontal and vertical surfaces – the basis for optimal viewing and learning conditions. The effect that light has on humans is indisputable and so the quality of lighting is getting more and more important. The right light in schools contributes to many points, which previously got less attention in lighting design: learning ability, concentration, health. Students at Theodor Fliedner High School are now learning under better conditions: the light does not flicker, the illuminance on the tables is properly tuned and the lighting is absolutely evenly through the opal cover. A pleasant atmosphere for learning.

The mounted luminaire is the XOOMINAIRE™ 4262. With a luminous flux of 2,200 lumens per meter and the light color 4,000 K it is ideal for lighting in classrooms. For integration into the architecture of the ceiling a suitable solution was developed together with the customer. The luminaires were manufactured in customized lengths and delivered with special mounting brackets. The installed luminaires are flush with the ceiling beam and run elegantly between the white ceiling panels, giving the impression of a modern ceiling grid. The white ceiling panels are additionally reflecting light and make the room appear brighter. Through this interaction between architecture and lighting design, the classrooms are enhanced and there is a welcoming and open atmosphere.

The lighting renovation was urgently needed: the durability of the old system with T8 fluorescent tubes was exhausted, the technology was outdated and the demands of lighting in classrooms were no longer met. It is no longer enough that the illumination only provides light – just as important are quality of light, cost efficiency and environmental performance. The choice fell on the linear luminaire XOOMINAIRE™ made by LED Linear™. Compared to luminaires with T8 fluorescent lamps it has greater efficiency, offers a far better, absolutely homogeneous light and has, thanks to LED technology, a much longer lifetime. This reduces the energy consumption and lowers operating costs. Another factor when it comes to environmental performance are also the components from which the luminaires are made: in comparison to the "old T8", no harmful substances such as mercury, gases etc. are processed and used in the new luminaire.

So far, seven classrooms were renovated. It goes on in the autumn holidays. 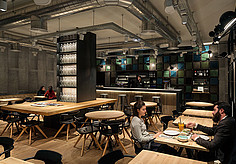 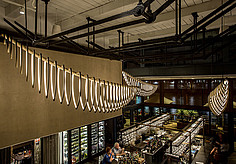 next project
The Gantry Restaurant and Bar
Sydney, Australia