In 2017 a new Swaminarayan Hindu temple was completed in Nairobi, off Langata road. The large building is decorated with a breath-taking amount of stonemasonry and utilises a lot of architectural lighting to highlight the beautiful craftsmanship and play on its three-dimensional properties.

At ground level KALYPSO was used to graze the half columns, both on parts of the façade as well as in the colonnade on the front of the building. In the main atrium VarioLED Flex VENUS TV (Top View) was set into the flooring to light the bases of the free-standing columns. The first level features a mix of VarioLED Flex VENUS: to highlight the outsides of the columns on the façade VarioLED Flex TV was used, whereas VarioLED Flex VENUS SV (Side view) was set in long lines to bring out the curved balconies, together creating a continuous line of light around the building. Again KALYPSO was used to graze the intricately and individually carved half-columns on the inside of the colonnade surrounding the first level.

On the second floor VarioLED ECO IP67 was used to illuminate the inside of the arches overshadowing the windows, creating a light and shadow contrast on that level. Throughout the entire project warm CCTs of 2700K and 3000K were used to bring out the natural pinkish colour of the sandstone used for the façade elements and decoration.

Albeit the building is a temple its rich decoration and comprehensive lighting scheme make it appear like an oriental palace from days of yore. 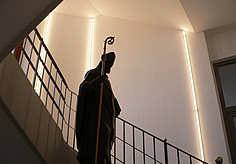