What was originally a department store, built in the 60's, got new screen printed glass facades and a thorough renovation. It became a shopping mall including cinema, grocery store, restaurant etc. Through good architecture, the public spaces are loaded with activity. This is just one of the blocks of Helsingborg's gigantic urban renewal project H+, which aims to densify and connect the district called Söder with the new neighborhoods that are built in the old harbor areas.

The goal of the facade was to recreate the classic entrance to the cinema and the feeling with neon tubes but with modern technology. The choice fell on the VENUS RGB TV thanks to the evenly illuminated surface and the small size that made it possible to mount between the facade elements. 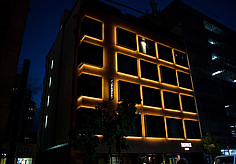 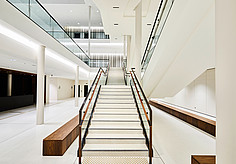