A young city is celebrating a milestone birthday and LED Linear as a young company from the Lower Rhine are part of it: 2015 Karlsruhe will be 300 years young and LED Linear supports the city's birthday as the official supplier for LED lighting. Karlsruhe commits its 300th anniversary with a summer festival over 15 weeks (from 20th June 2015 until 26th September 2015). The heart of the Karlsruhe festival summer and the eye catcher in the castle garden is a newly designed pavilion, which offers visitors a colorful cultural program. With its innovative design language the multifunctional pavilion forms a delightful contrast to the historic backdrop of the castle.

As the official supplier LED Linear has illuminated the pavilion with impressive LED lighting solutions, which were integrated into the beam construction. The absolutely dot-free and homogeneous light gives the pavilion an almost reverential atmosphere. The products provide a high light output, are UV and water protected and offer optimum lighting quality thanks to Japanese LEDs. Thus they meet the demanding design specifications and further requirements for the use in this project. With their gentle homogeneous light the luminaires also conform with the sensitive flora and fauna in the immediate vicinity of the pavilion. The building is attractively illuminated, emphasized in height, structure, surface and materiality and encouraged in its revolutionary character. The architectural sculpture was designed and implemented by the project community "J. Mayer H. and partners, architects and Rubner Holzbau GmbH". The lighting design was taken over by the company “lichttransfer” from Berlin under the direction of Katrin Söncksen. 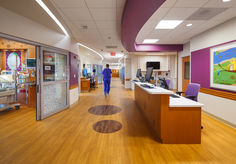 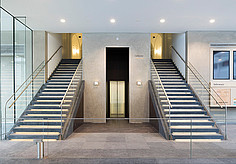