The Main Branch of the Chicago River has a long history that in many ways mirrors the development of Chicago itself. Once a winding marshy stream, the river first became an engineered channel to support the industrial transformation of the city. Over the last decade, the role of the river has been evolving with the Chicago Riverwalk project – an initiative to reclaim the Chicago River for the ecological, recreational and economic benefit of the city.

The design team needed to work within a tight permit-mandated 25-foot-wide build-out area to expand the pedestrian program spaces and negotiate a series of under-bridge connections between blocks. In addition, the design had to account for the river’s annual-flood dynamics of nearly seven vertical feet. This portion of the Riverwalk comprises five different, themed blocks: The Marina Plaza, The Cove, The River Theatre, The Water Plaza, and The Jetty, each with their unique look. These blocks, or “rooms,” posed several challenges to the lighting design team. The lighting design called for all fixtures to be robust, rated for submersible applications, low maintenance, low glare, and well integrated into the architecture, while easily accessible for maintenance. In addition, the city wanted to minimise the number of fixture types and reduce energy consumption, prompting fixture consistency from “room” to “room” and using high-efficacy fixtures to deliver appropriate illumination levels for safety and comfort. The design team also consistently monitored the cost to retain the stringent performance requirements of the project without sacrificing the aesthetic aspect of the design.

The lighting for the newly redesigned Riverwalk was designed to be playful, welcoming, and interactive – a drastic departure from the stark, security-style lighting of the past. In the Jetty, the VarioLED™ Flex VENUS TV RGB or the “Fish Lights,” as the architects called the colour-changing LED lights, were used at the boundary where water meets land. The submersible lighting and wiring solutions provided by the design team in this project, were “field tested” a few days after the opening, when the site completely flooded and the fixtures remained energised. 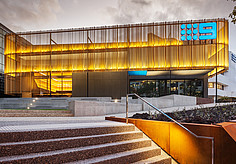 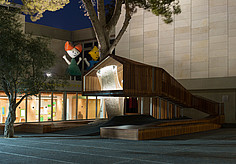