Running east and south from the Albert Embankment of the River Thames in London is Black Prince Road. The railway tunnel is part of the historic road and famous for its mosaics and glazed ceramic tiles. The walls of the tunnel are enlivened with a series of little ovals, some glazed pottery, some mosaic, illustrating respectively Doultonware and the Black Prince – after whom the road was named after. The pieces were made by different artists and are now illuminated with downlights. To uplight the ceiling of the tunnel, VarioLED™ Flex ATON R IP67 was chosen. The linear lighting solution illuminates the ceiling evenly and gently. Likewise, the lines support the orientation of passers-by and other road users. The chosen red light color and the homogeneous light distribution create an exciting contrast to the white light and the punctual light distribution of the downlights. 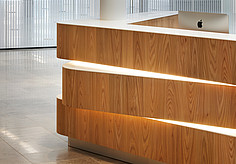 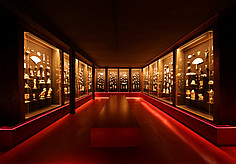